A young boy in the Bedouin village of Khan al-Ahmar in the West Bank. (Yaniv Nadav/Flash90)

The European Union on Thursday urged Israel to reconsider its decision to build 2,000 new settlement homes and to demolish a Palestinian Bedouin village in the West Bank, saying it undermines “prospects for a lasting peace.”

A statement from the EU denounced the intended destruction of the Khan Al-Ahmar village, which comes at the same time as the construction of more settlement homes.

“Building new settlements for Israelis while demolishing Palestinian homes in the same area will only further entrench a one-state reality of unequal rights, perpetual occupation, and conflict,” the statement said.

The EU referenced a decision made Wednesday to build nearly 2,000 settlement units in the West Bank, while demolishing Khan Al-Ahmar in Area C, which it called “the main land reserve of a viable and contiguous Palestinian state.” 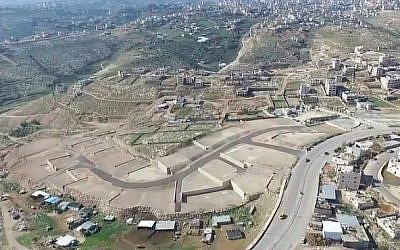 The grounds of the neighborhood that the state built for the Jahalin tribe after they evict them from Khan al-Ahmar.

The court ruled the village was built without the relevant building permits.

Israel says it has offered the residents an alternative location, near a garbage dump in the nearby Palestinian town of Abu Dis. Bedouin villagers say the location is unsuitable for their way of life, and have also said residents of Abu Dis have warned them not to come there.

“These developments, alongside a number of other related actions taken in recent months, seriously undermine the viability of a negotiated two-state solution and the prospects for a lasting peace,” the statement said.

“In line with our long-standing position on Israel’s settlement policy, illegal under international law, and actions taken in that context, such as forced transfers, evictions, demolitions, and confiscations of homes, the EU expects the Israeli authorities to reconsider and reverse these decisions.”

The EU said it has raised the issue directly with the Israeli authorities.