Report in the UK Guardian

“They want to empty the bedouin from the whole area, and they will put settlers in our place, and there will be no Palestinian state” 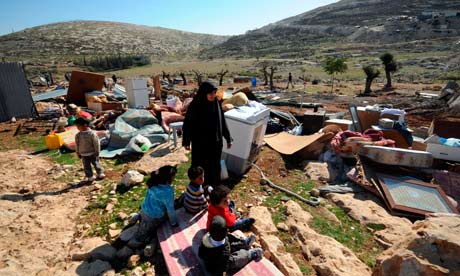 Around 20 bedouin communities between Jerusalem and Jericho are to be forcibly relocated from the land on which they have lived for 60 years under an Israeli plan to expand a huge Jewish settlement.

The removal of around 2,300 members of the bedouin Jahalin tribe, two-thirds of whom are children, is due to begin next month. The Israeli authorities plan to relocate the families from the West Bank to a site close to a municipal rubbish dump on the edge of Jerusalem.